In reading Homer’s Iliad these past few days, I have been overwhelmed by the seemingly endless cycle of violence, bloodshed, and death that is characteristic of wartime. The repetition of these armament and rearmament scenes has been the focus of much of my thoughts while reading. I am amazed by the soldiers’ enthusiasm to march to the front line and the bravery of a heroic few to charge into enemy territory knowing their imminent downfall, and I can’t help but wonder their thoughts before engaging in conflict. 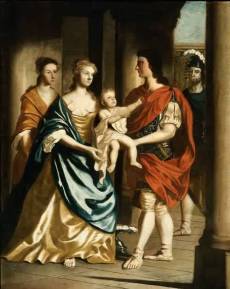 Hector leaving Andromache and Astyanax. How can he leave his family? (From The Trojan Women)

The individual decision to join in combat can require a great deal of thinking, or at least some form inner conflict that may be considered a “war within one’s self.” War takes a toll on the mind and the body, and “the discomfort of war is perpetual” (Castillo 2). That being said, why do men degrade themselves to the horrors of war? Hector, a hero in the Iliad, is internally conflicted with whether or not he should go to war. As an epic hero, Hector is bound by the heroic code, and thus must fight for the survival of his city, Troy, and to protect the values his city represents. However, he is also a husband and father, and in choosing to going to war, Hector, who is fated to die at the hands of Achilles, will accept his own death at the expense of his family. Unfortunately, he cannot both represent and defend the family and communal values of Troy, while at the same time have a family and community of his own. To have one is to undermine the other. If Hector chooses his family, he abandons Troy because he can no longer fight in the war, but if he chooses the safety of the city, he must give up his family in the process. While “all this weighs on [his] mind,” Hector chooses to go to war due to his obligations as an epic hero (Homer 6:522). For him, it is a sense of duty and obligation that drives him to action. 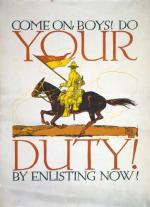 It’s our duty. (From Learnnc)

In talking to former veterans and people currently serving in the armed forces, I often hear, “It is my duty to serve my country.” Centuries after the Trojan War, it seems as though nothing has changed, many people who join in combat or enlist in the army do it because they feels as though they have a responsibility to their country. It seems as though a sense of obligation overpowers conflicting feelings men may have about entering combat. If this is the case, as long as people feel obliged to defend their country, there will be people to fight in wars.